Today’s the first day of the tour—we meet at the Tenleytown metro station and actually, that is a real meeting: I’ve never met Johanna in person before.

American University is the inaugural presentation. None of us have heard the other present before, none of us have gone through all the slides in front of an audience before. It takes about an hour to set up, what with laptop sharing and internet and cord connectors–then I settle in to listen to Johanna’s and Joe’s presentation.

What’s the divestment training tour for?

The divestment tour is a perspective on climate justice movement past, present and future. Where are we coming from and what are we fighting for? What are all the injustices that we’re fighting? Then we get some tools for the fight: how to tell strong stories that engage people and unite us, through social media. And then there’s a glimpse of what is possible in a growing national student network, and a visioning exercise for what could be possible with the strength of 300 divestment campaigns behind it.

So here’s what I say:

The Divestment Student Network evolved out of the first fossil fuel divestment convergence held at Swarthmore College in February 2013. When 200 students gathered in one space, people realized that we all have a lot of power together, and we should create a container to hold and build that power. A small group of students worked through the summer to get others involved and create a structure so that, when launched, people could join the Network and have some way to become engaged right away. The day we chose to “launch” was at Powershift in October 2013. We hosted a breakout session on divestment and the network that over 100 students attended to brainstorm a vision for what a network of students could do together. People connected and signed up for working groups, and the network was up and running.

What is the network? What are these structures that are easy to jump into?

(Credit and heartfelt thanks to Peter Morrow)

The Divestment Student Network has two main structures: the working groups (shown above) and the DSN Assembly (shown below). Working groups are made up of students, recent alums, and can include national organization staff, and they carry out projects of the Network. Check out the Divestment Student Network website for more info on the projects each group is working on at http://studentsdivest.org/. 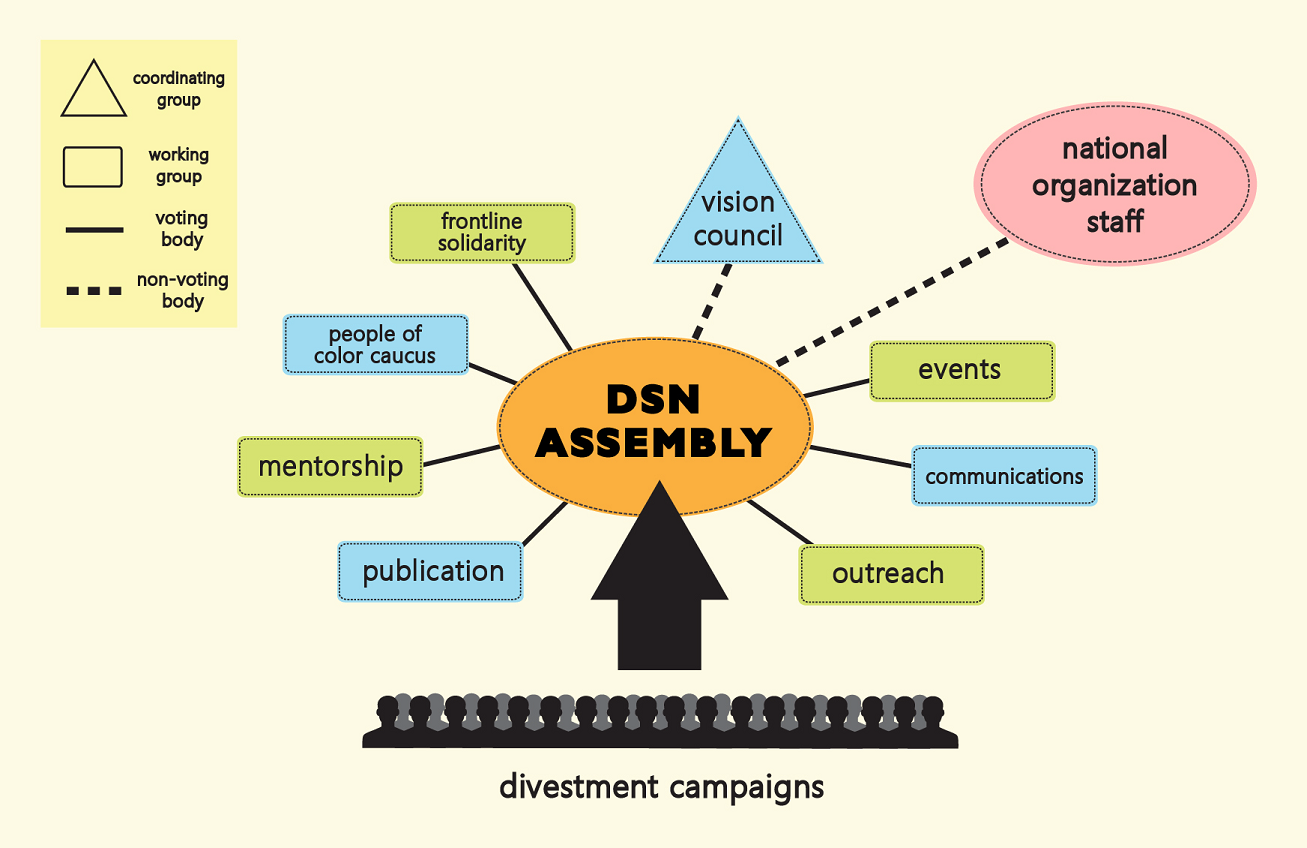 The DSN Assembly is a space for divestment campaigns from across the country to gather and share in between the yearly convergences. Assembly Calls happen every other week, and anyone involved with a divestment campaign can call in to participate or just listen in. Our goal is to have a representative from every divestment campaign at the table, so the Network becomes representative of the full breadth of the divestment movement. Assembly calls are a place for working group report-backs, proposals to be voted on by the entire assembly, and movement-wide discussions (such as lessons from successful campaigns, regional networks, or skill-sharing trainings).

I end the talk with the ways students can get involved: joining a working group or attending an Assembly call, and coming to the Convergence in San Francisco this April 4th-6th, the first in-person meeting of the Network.

But truthfully, I’m not behind it.

Joe’s presentation on the telling of stories is really burning through my brain. “The most important thing we can do is tell stories of resistance and hope.” Who was ever inspired to take action by reading a flowchart? Where are the trials and the foibles? Where is the heart?