Divestment Roadshow: The knowledge is in the room

At the end of my presentation, I pose three questions for campaigns to discuss in small groups:

How could being part of a national network help your campaign?

If you were in a room with divestment students from around the country, what would you share? What questions would you ask?

If all of us in this network committed to working together for the next 3 years, what would be possible? What goals should we have, and what strategies to achieve them? 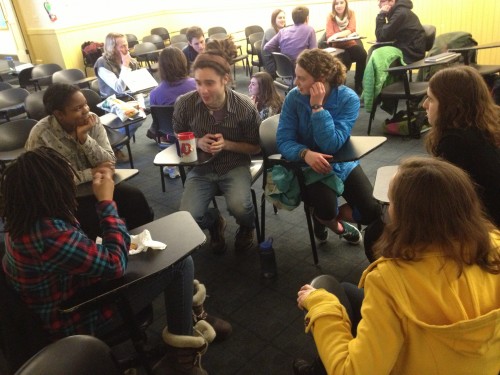 (Folks from Tufts, Brandeis, and outside the college discussing Network potential)

The seeds for a successful and powerful network are already in the room. Over and over, folks are saying the same things. At American University, the storytelling ninjas, at Georgetown, in the thriving metropolis at NYU, the folks showing up in Boston at Brandeis, Tufts, Northeastern, and the three schools that converged in Western Mass (Mt. Holyoke, UMass Amherst, Smith), all the way up to our last stop at Brown, who has heard “No” from their administration–We All Need:

1. A better sense of what’s going on everywhere else

Student campaigns are all doing amazing things–using creative new tactics, getting to new stages in their campaign, compiling resources on certain companies, even making mistakes and learning from them. The entire movement can benefit from sharing those resources, but also just knowing where we all stand. Pointing to other campaigns and what is happening there is a tool for greater power. College administrations are sharing strategies on this, we can be sure–we can be just as connected and powerful.

Students want skills! How do you reach the student body and alumni–recruit, petition, door-knock, phonebank? How do you run fun and anti-oppressive meetings, how do you move people up the leadership ladder and maintain a strong campaign through time? We need to be mentoring each other, and that’s a big part of Assembly calls, the Mentorship working group, and in-person meetings for workshops and trainings, like the Divestment Meet-up before XL Dissent and the Convergence.

The most successful roadshow stops by far were areas with existing networks, where schools had set up relationships and had worked together before and came together for a shared training. Many regions have more than one school with a divestment campaign–how can regional networks get off the ground? How can they be used as vehicles for in-person meetings that facilitate mentorship and coordinated action, both on a and off-campus? These ideas can materialize through the Network as a central hub.

When I was preparing for this roadshow, and the thought of undertaking “pitching” the Network to dozens of students felt like an existential threat, my friend and fellow Maypop member Will told me something that really helped me. “It isn’t about what you say. It’s about building relationships. If you get even 3 students fired up and committed to working with the Network, the Roadshow will be a roaring success.”

I don’t know how many students became committed to the Network. But I became 10 times as committed to working beside students. All these people I met are the young people in my movement. I’ve seen the faces and hear the voices now, eaten chips and salsa with you all, and hear what we all need. Through this network, we’re building relationships with the fellow activists who will continue to fight for climate justice for the next 3, 5, 15 years. Building a movement strong enough to win real solutions to climate change’s injustice means supporting each other to grow as leaders now.