When the Maypop Collective was first approached about joining a newly-emerging progressive coalition in Philadelphia that was backing John Hanger for governor, I was conflicted. I have been disappointed by electoral officials time and time again. I was further disappointed to see that John Hanger had not come out in support of a moratorium on fracking. I have spent the last three years campaigning for fossil fuel divestment and working closely with others in the anti-extraction movement. I believe we need to end fracking in Pennsylvania. I believe that the fossil fuel industry corrupts our political system and routinely poisons and kills people in this country and abroad. I believe that we have to fight for a transition away from fossil fuels with all our might.

I also believe that to effectively transition away from an exploitative, fossil-fuel based economy to a just economy that values people, land, water, and air, we need to dig deep. We need to build lasting relationships across movements whose interests are tied with one another. So when Progressive Philly Rising approached the Maypop Collective for support, I moved past my initial hesitation and listened. They presented a long-term vision for progressive and working class power in Philadelphia that inspired and excited us in Maypop. We talked and thought and paced and questioned. We worked through the ways in which the fight for ecological justice in Philadelphia is inextricably linked with the fight for economic and racial justice. After much deliberation, we decided to join the coalition.

On February 1st, over 250 people gathered at Arch Street United Methodist Church for PPR’s first public event to hear about its vision. The event featured a host of community organizers from Philadelphia, including Nancy Dung Nguyen with Boat People SOS, Kia Philpot Hinton with Action United, Mohammad Shukur with the Unified Taxi Worker Alliance, Desi Burnette, an organizer for migrant justice, and others.

It was amazing to be in a room with people representing so many issues: the fight for public schools, the fight for fair housing, the fight against deportation. There were groups working toward racial justice in Philadelphia, union organizers – a range of brilliant organizers and passionate advocates. We in the audience were able to imagine just how powerful we could be if we build and fight together. 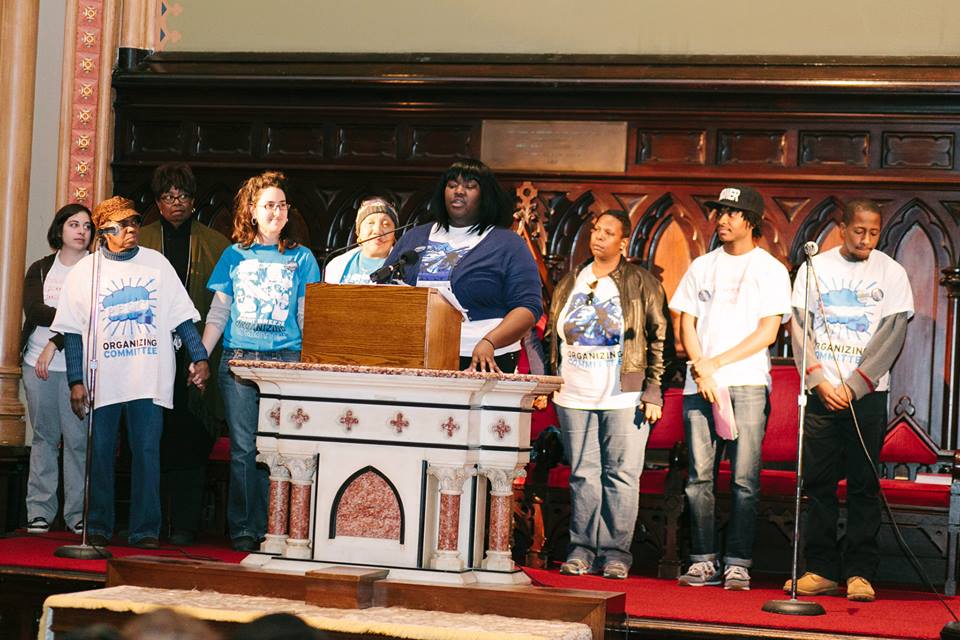 Members of the Point Breeze Organizing Committee (PBOC) opened the program by calling on the audience to imagine what it could look like for progressive forces in Philly to build power and WIN. Multiple speakers affirmed that we CAN overcome corporations and their mounds of cash. We heard members of PBOC talk about challenging a powerful developer from controlling parts of the Point Breeze neighborhood. And they won. We heard about hotel workers overcoming corporate intimidation and winning on a union contract. We heard about Asian American students and African American students at South Philly High coming together to hold their school administration accountable for keeping their school safe. They won too. We heard from organizers and advocates who successfully stopped school closures in Philadelphia this year.

Each person spoke to the interconnected nature of the struggles represented in the room. As Helen Gym with Asian Americans United and Parents United said, “We have to recognize that the very same interests that regard education as a business, schools as centers of potential profit, parents as consumers, and teachers unions as obstacles to corporate control, will approach every arena of life with the same exploitative zeal.”

Nancy Nguyen with Boat People SOS said it beautifully: “I know that we in this room envision a city with strong public schools…where our jobs allow us to live dignified lives…A city with increased civic participation from all our marginalized folks – immigrants, young people, progressives, LGBTQ folks, African-Americans. I envision a city where we are all leading.”

The speakers at the event had no delusions that an elected savior could solve all our problems. Nancy, again, sums it up nicely: “We know that our work doesn’t stop now…We know that these are particular important milestones that we need to win as we grow in our work and develop ourselves.”

Meanwhile, Progressive Philly Rising is proactively demanding a progressive agenda and backing a candidate who is adopting it. To name a few examples, John Hanger has truly progressive stances on mass incarceration, public education, and deportation. These issues can be the difference between life and death for working class communities and communities of color in the city.

There was a palpable sense in the room that a progressive front in Philadelphia could win on any number of issues. And if there is one thing we know in the environmental justice movement, it’s that we need to win.

Imagine if we who are fighting for environmental justice could build with unions to create community-controlled green jobs. Imagine if we could work with migrant justice groups to ensure that people can migrate freely as climate impacts worsen. We could work with housing rights groups to make sure everyone is free from the threat of displacement. We could work with food justice groups to develop food sovereignty for marginalized communities. We could mobilize our neighbors and work with other people who are doing the same. Then we would be creating a mass movement with staying power. Imagine if we could do that all together so that when corporate interests threaten any of our human rights, we are all there ready to fight. Then we will win.

Maypop is committed to the work of Progressive Philly Rising because we believe that a “Just Transition” means that as we fight the fossil fuel industry, communities are also building power. We want to support communities that are building power to have control over their own housing, education, food, water, and energy. We see backing John Hanger’s People’s Campaign as one step in a long struggle for progressive political power and justice.

← Welcome!
Our Journey So Far →