All day: We’re scrambling around the Responsible Endowments Coalition office, having lots of 3-minute meetings. Sachie and Hannah meet with reinvestment team and start planning regional connections between grassroots groups and campus divestment campaigns. Reinvest in Our Power

5:00PM: From giant life preservers to bird puppets to Mother Earth, PCM was striking for its breathtaking visuals. Alexa spent some time in one of the epicenters of creation leading up to the march, painting signs at the Mayday art space that read “Youth Choose Climate Justice!”. Alexa took a break from painting to interview Louis Romain who was working on the banner the interfaith contingent of the march would be holding. “To me, healing is form of worship. Advocating for the climate is worship; it’s an exercise of faith,” Louis told me. Hear more from Louis on the meaning of climate justice, his roots in the Caribbean, and the power of prayer. 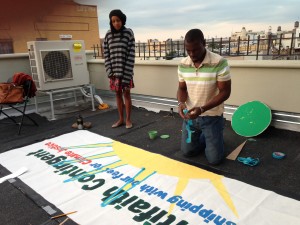 7:30PM: Zein, Dinah, Sachie, and Alexa attend Rockaway Wildfire’s presentation and party. Members of Rockaway Wildfire share about their campaign for a community benefit agreement and how they organize post-Hurricane Sandy for community control of land and climate resiliency. 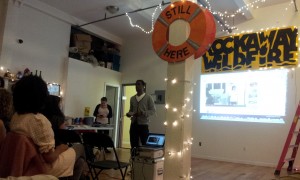 10:00AM: Philly’s Earth Quaker Action Team performs a theatrical investigation at two Manhattan PNC branches, uncovering evidence of the bank’s ties to the poisoned water and destroyed communities of Appalachia.

11:00AM: Zein attends a lecture about Casa Pueblo de Adjuntas, a community organization in the central mountains of Puerto Rico that defeated two multi-national mining companies 30 years ago and more recently halted a destructive 92-mile long gas pipeline. He’s struck by the central role of cultural organizing in the campaigns and the establishment of coffee businesses to fund movement work. Part of Decolonize Climate Justice.

12:00PM: Zein joins presentation and discussion facilitated by Nicholas Powers about apocalyptic politics in the climate movement and the role of utopian visions in social movements. Part of Decolonize Climate Justice.

1:00PM: Alexa unexpectedly shares a cab with two panelists speaking at the Climate Convergence from the organization Iraq Veterans Against The War. Grateful for this time to deepen her understanding of how militarization relates to climate, she listened to Matt Howard talk about IVAW veterans traveling to Afghanistan to open up conversations about reparations with women’s community groups and the strong relationships that have resulted. Think of what the climate movement will learn from folks like these as we continue to think about the concept of climate debt and reparations for those who experience the most severe impacts of climate change but had little to do with causing it. This is why different movements must keep coming together!

5:00PM: Kali Akuno on work with Cooperation Jackson: “The ultimate goal is not to govern, but to make space.” When asked about role electoral organizing should play in Left strategies, he responded by saying “some questions are mass questions, some are administrative questions for leadership,” warning not to get held up on questions that should be deliberated and decided by your base. Cooperation Jackson has joined the Climate Justice Alliance. You can hear Kali Akuno talk about it on the Black Agenda Report.

10:00PM: Will is at a party at Columbia with divestment student leaders from around the country, celebrating the rare opportunity to be together in person.