By Alexa Ross and Zein Nakhoda

On September 21, we joined hundreds of thousands in the streets of NYC for the People’s Climate March (PCM). Billed as the “largest climate march in history,” it was significant not only in scale, but in offering a vision of the broad-based movement for climate and economic justice we need.

Lively discussion continues about what the march accomplished and what it means for the big picture. A central question hinges on how the momentum of the march will be taken back to the community level, so we’re listening to leaders in our home city of Philadelphia who were among the frontline leadership. We spoke with some groups in the streets of Manhattan among the rush of marchers; with others we had conversations back in Philly.

We heard the makings of a powerful front in Philadelphia, in the ways leaders link ecological justice with other struggles and in examples of community-led solutions to climate change in our city.

Before the march, we spoke with Terrance Meacham about ACTION United’s effort to fill Philly buses heading to NY. “Philadelphia is becoming a hub for refineries and toxics” that pose threats to human health, he said. Terry King, Action United member, echoed him in a statement from Philly organizations supporting PCM: “Environmental issues such as flooding, increased asthma rates, and pollution impact low income communities and people of color more than any other group of people in the city.”

At PCM, labor unions and worker associations were near the front of the march, under the banner “We Build the Future.” Among the group was Joyce Lindorff, member of the American Federation of Teachers and board member of the Coalition of Labor Union Women (CLUW) in Philadelphia. “We need jobs, but not jobs that pose a danger to workers or the environment,” said Lindorff, discussing the importance of organized labor at the march.

Also marching was Margaret Stephens, a professor with the Faculty and Staff Federation of the Community College of Philadelphia (FSFCCP). When asked if endorsing the march was contentious among FSFCCP, she answered, “not at all.”

Unions are recognizing the false choice between jobs and environment, she said, referencing events like the labor and climate justice forum held last spring in Philly. As an environmental science professor, Stephens has an acute sense for the “pervasive and devastating impacts” that current and future generations will experience if we allow the climate to warm. Stephens remarked on the leadership potential she sees in her students, another community on the frontlines, “who have been suffering effects of economic and climate injustice” already.

The People’s Climate March seemed a little quiet at first to Giancarlos Rodriguez, a student at Kensington CAPA and active member of Youth United for Change. “But we chanted and got the UN’s attention,” he said, reflecting the spirit and leadership YUC is known for in Philly’s public schools fight.

Rodriguez led the chant, “No education, no what!? No education, no life!” It’s powerful to see young people, the inheritors of a broken economy and legacies of environmental destruction, defending their right to a stable climate and stable education. “If it’s affecting youth and others in our community,” he said, “we’re not going to tolerate it.”

At the front of the march, a vibrant banner tied the experiences of these groups together, “Frontlines of the crisis, Forefront of change.” Each intersection between economic, racial, and climate justice holds a different piece of our movement puzzle. Seeing labor and education organizing as climate justice work builds toward the visionary and broad movement we need.

At PCM, we also spoke with the Eastwick Friends and Neighbors Coalition (EFNC) of Southwest Philly, who hold a distinct and complementary puzzle piece – community-led solutions to climate impact.

“We need to build homes that are going to withstand the effects of climate change – not based on current conditions but on projections of the next 100 years,” Joanne Graham, the environmental chair of EFNC, told us. Located in the Cobbs Creek floodplain where Joanne experienced 20 floods in her home within five years, the neighborhood takes severe weather and sea level rise very seriously, particularly when it comes to infrastructure. “We’re already getting more rain now than in the past, and a lot of houses in Eastwick were built in the 70s and are not prepared for increased rain.”

Given their genesis fighting a development proposal that would have exacerbated flooding in homes, EFNC knows most developers aren’t building with ecology or community control in mind. The two superfund sites EFNC discovered in their neighborhood after defeating the development plan proves it. “You must organize with your neighbors and come together as a force to secure what should be your right to live in a safe, healthy community,” Ramona Rousseau-Reid of EFNC made clear. “If you want change you have to be willing to do the work,” she added, “and it’s a lot of work.” 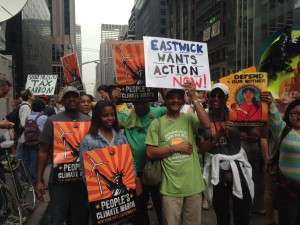 EFNC reminds us that while we organize to mitigate climate change and reduce emissions, we must also consider the vast ecological transitions in motion that are impacting parts of the city. It will take community-led solutions based in place to weather the storms ahead. Located adjacent to the Heinz Wildlife Refuge, EFNC’s vision of ecology-based community development prepares for severe weather while also supporting thriving ecosystems. This is the kind of vision for the Just Transition we need.

At PCM we saw frontline communities with similar visions coming together from across the country to build alignment and shared strategy. The Climate Justice Alliance played a pivotal role in NY by facilitating involvement and leadership of frontline communities and shifting the narrative to systemic root causes of climate change. CJA represents leadership from over 35 grassroots organizations campaigning for a Just Transition to an economy that takes care of people and planet. The organizations focus their work locally while coming together to strategize nationally.

What would it look like for Philly to join this movement for a Just Transition? We see a glimpse of the work already here. Philly communities are already reclaiming labor, defending the rights of young people, campaigning for community development, and organizing for fair school funding – contesting the extractive economy and growing visions for a just and stable future. What kind of victories could we see if these groups continued to build shared analysis together, increased their collaboration, and connected with similar hubs across the country? The march showed that a powerful movement from the roots is closer than we think–and those visions of the future are within our reach.